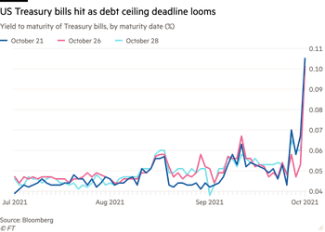 Yes, this has been seriously suggested as a solution to raising the debt limit. This would not be just any coin-not even a gold coin-but a Platinum coin. The way it would work is the President would order the US mint to create a Trillion $ coin and deposit it at the US Treasury. This Trillion $ could then be used to pay US government obligations. The reason it would be platinum is that legislation limits the amount of paper, silver, copper, and gold that can be circulated at once. Platinum is not listed as having that limit.

There are potential problems with this solution. Inflation could result based on the prospect that the federal government could do this again and even this one time would devalue the other $’s in circulation by increasing the money supply. Currently, our economy has two levers that are separated by legislation. One is Monetary Policy currently controlled by the Federal Reserve and the other is Fiscal Policy controlled by Congress. Issuance of the Trillion $ coin would bridge the separate policy responsibilities with a diminishment of the power of the Federal Reserve. US Treasury Secretary, Janet Yellen is familiar with the power and separate policy responsibilities of the Federal Reserve having preceded Jerome Powell as Fed Reserve Chairman.

In the meantime, the deadline to raise the federal debt is rapidly approaching with a game of chicken prevailing. The latest as of Wednesday this week is that Democrats in the Senate are considering overriding the filibuster for the purpose of raising the debt ceiling. Remember the debt ceiling requires raising because of past spending, not current legislation being considered. On the legislative front, Democrats in Congress seem to be making tentative progress towards a digestible $ amount, still in the trillions, to pass the build-back better program of President Biden.

Also today, dramatic testimony from the Facebook whistleblower who was responsible for a stinging series of articles in the Wall Street Journal (link has paywall), followed by a 60 minutes interview and then Congressional testimony Wednesday and Thursday. She is very articulate and determined to demonstrate her insider’s view of Facebook as prioritizing profits over the knowledge that they promote unethical, damaging behavior, especially to children. They do this knowingly and intentionally because it promotes more views and more advertising. Currently, there is little or practically no legislation covering privacy issues. Has Facebook gone too far? It didn’t help that their new policy of denial, pushback, and Mark Zuckerberg sailing on his yacht while controversy confronts Facebook again. The whistleblower was extremely articulate, sympathetic, and thorough in addition to her desire to advocate for legislation. And as a finale, Facebook, Instagram, WhatsApp, and Messenger - the entire family of Facebook Apps - went down for about 6 hours mid-week.