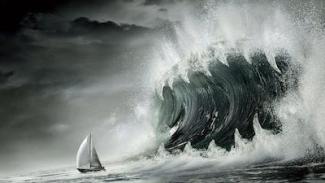 A tale of two tsunamic events

Sign up for e-delivery of tax documents by logging into www.advisorclient.com, then clicking My Profile > Communication Preferences.

A tsunami has struck.

No, not the kind caused by an earthquake that we are familiar with as Californians. This is a geopolitical tsunami, and it’s the second in a relatively short period of time; first the Covid crisis, now Putin’s invasion of Ukraine. It has occurred to me that there exist some similarities in human behavior between these two world-altering and life-altering events.

As the pandemic began, the first response from our President was denial. This isn’t to say the President was the only one in denial. Many of us were, and none of us could have predicted how long Covid would impact our pace of life, and economy. Denial in the White House continued even as a vaccine was being developed. As cases and deaths surged we saw different regions reacting differently. Those with more faith in government and institutions responded positively to restrictions and maintained high compliance on the part of populations, especially in the SF bay area.

Political divides were highly predicated on compliance coupled with confusing CDC guidelines. Blue areas of the nation tend to be the most conservative and protective with their behaviors to protect against Covid. As vaccines were distributed and injected, those same areas that followed CDC guidelines had and still have higher vaccination rates. Same with booster uptakes.

Those not following CDC guidelines and avoiding vaccination experience much higher rates of hospitalization and death; yet, in the face of these facts, still refuse to get vaccinated and boosted. And then along came Delta. The guidelines that were relaxed, were reinstated. These re-imposed restrictions faced increased pushback from those same individuals. When Omicron spread rapidly, the same predictable results were apparent by each geographic and politically-inclined area.

With a change in executive leadership, the political and human behavior pattern had already been established: division. Despite this division, the world seemed to respond with higher compliance during surges by geography. And when the surge dissipated, behavior reverted back to less compliance and a return to “normal.”

Now the second tsunamic upheaval, we witness human behavior in response to another world crisis. Aspects of the Ukraine crisis began many years ago with the dissolution of the Soviet Union and with the occupation of Crimea in 2014. Putin took advantage of the division in the Western democratic world by fomenting the division through propaganda. Putin encouraged Trump to distance the US from NATO. The recent division and rise of the right in world democracies provided an opportunity for Putin to move towards restoring what he thought was the glory of the Soviet Union. His threats against Ukraine provided him with power and attention like a schoolyard bully. There was no way to avoid the attention because of the threats by nuclear powers.

What Putin had not calculated was the difference between the threat and the invasion. With the recent history of political division in the west and Russian leverage over energy supplies, Putin was confident a unified response was unlikely. When pushed to an extreme, especially where the victims are obvious as is the aggressor, even country regimes friendly with Russia have united with the Western alliances such as the EU and NATO to resist Russian aggression to the surprise of many analysts: Putin has pushed too hard and too far.

Germany canceled the Nordstream II project, Switzerland joined NATO and the EU in freezing Russian assets. Sanctions started out modest but quickly snowballed to help bring the Russian economy to its knees. Russian central bank interest rates were increased from 9.5% to 20% this week to salvage the ruined Russian currency. This is unprecedented. Russia was suspended from the SWIFT banking system, a secure network on interbank exchange to pay bills across borders and currencies. The Russian central bank has its assets frozen preventing Putin from accessing all his foreign reserves. Apple pay, Visa, and Mastercard don’t work in Russia. This worldwide response demonstrates the power of a unified response.

Imagine if the former President was in charge with his attempt to eviscerate NATO and distance from our allies with unpredictable behavior. A close relationship with Putin could have resulted in a very different world response.

The example of strong, united, deliberate, and thoughtful leadership as a response to any crisis should not be far from our thoughts.

Upcoming this month is the promised Fed interest rate increase. The only problem is the Ukraine crisis which is pushing long-term rates lower. Unknown how this will impact planned rate increases and economic growth. Also, the world has been paying a price, even before Ukraine, with stock price declines. We are in correction territory and it is not clear where or when declines end, but they will. Stay tuned.